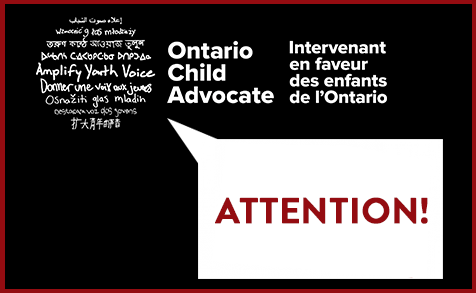 Ottawa, ON – As organizations deeply committed to the well-being of children and children’s rights, we express our concern with the decision of the Ontario government to eliminate the position of the Provincial Child Advocate. Today, young people in Ontario lost their most powerful advocate, as the province joined Prince Edward Island and the North West Territories as the only jurisdictions without an independent voice for children and youth.

We understand that Ontario will give its Ombudsman responsibility for conducting investigations that relate to children and youth who are in the care of government, including in child welfare, in youth justice systems, and those in secure treatment programs.

“The First Nations Child and Family Caring Society strongly believes that independent officers such as the Ontario Child Advocate are essential to oversee provincial/territorial government policies and programs that affect children and youth living in vulnerable situations,” says Cindy Blackstock, Executive Director of the Caring Society. “The Government of Ontario is not acting in the best interests of children by eliminating this vital service.”

Supporting young people’s rights is not just about investigating complaints – it’s also about educating them about their rights, listening to their voices, and acting on their recommendations.

Children’s advocates play an essential role in engaging young people, especially those who are overrepresented in care, to understand the challenges they are facing and create positive system wide change to improve their lives. Organizations like the Child Welfare League of Canada (CWLC) and the Canadian Association of Social Workers (CASW) look to the country’s child advocates for knowledge about what changes need to happen within the system.

“Children’s advocates provide insight into the experiences of children and youth in child welfare,” says Rachel Gouin, Executive Director of CWLC. “We know from young people themselves that advocates are invaluable allies in advancing their well-being.”

Advocates help young people navigate complex institutions and assert their rights. They play an essential role that should be protected, especially in times of difficulty.

Around the world and in the UN Convention on the Rights of the Child (UNCRC), advocates for children are recognized and valued as necessary to ensuring the protection of children’s rights. Children in care and those whose rights are not being upheld need a strong advocate to listen and show them that they matter. Article 4 of the UNCRC outline government’s responsibility to make sure rights are protected.

“Every day, International Social Service Canada works on complicated cases that require that we place children’s rights in the center of our interventions,” says Director of Services, Sylvie Lapointe. “We know that if it was not for advocates in Ontario, in Canada, and around the world, we would be jeopardising young people’s futures.”

“Governments have a responsibility to take all available measures to make sure children’s rights are respected, protected and fulfilled. We need to give children the full services they deserve in very difficult conditions, without diminishing their ability to be heard and to participate in shaping the services provided by government. As an organization which is For Every Child we know how important it is to have a child focus in government,” David Morley, President & CEO, UNICEF Canada.

We urge the Government of Ontario to reconsider their decision – a decision that will only make it more difficult for children and youth to access their full rights.